Life has been different as of late. Dad has been gone from us now for 9 months, and there isn’t a day that goes by that I don’t think of him. He wish was to be buried in the National Memorial Cemetery with full military honors. On June 30th, 2015 we said goodbye and honored his life with family and friends attending the memorial. The veterans run a tight ship when it comes to memorial services. You are assigned a committal shelter the morning of the service, and are allotted 30 minutes for the ceremony. In that amount of time words are spoken by someone from the deceased’s branch of the military as well as by clergy and/or family. Full honors includes a 21 gun salute, the playing of Taps, and the presentation of the flag. In this instance, the flag presented to my mother was done so by two young men, in full uniform, from the Air Force Honor Guard. They were extremely professional. Dad would have been impressed.

I had taken a few pictures of the cemetery weeks before the service. Turns out the the shelter I photographed was the actual shelter we were assigned to the day of the service. Coincidence? I think not. The universe is rarely that careless.
It’s a very beautiful desert cemetery, and does our veterans proud. Click on any of the pictures below to view a full-size image, then use the arrows [left and right] to scroll through them. 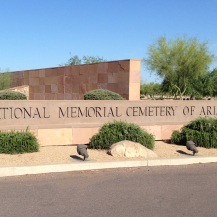 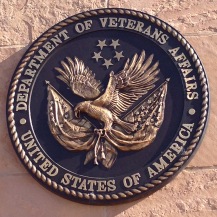 I have been wanting to make another post about my Dad, but I have been struggling with what to say. Then today, February 14th [Valentine’s Day], and exactly 9 months to the day since Dad’s memorial service, all that changed. First, let me preface with something some of you might find to be a little “out there.” Not long after Dad passed, I had several visits from a red dragonfly in my backyard. It would always appear in the morning when I would be outside in the backyard with Bella. First, it would let me know it had arrived by flying a little too close and then it would proceed to fly from one side of our backyard to the other for several minutes. This went on for about a week, with it flying about even after Bella and I would go inside. Now, we have NEVER had a dragonfly in our yard, much less a red one, in the last four years we have lived here, and we haven’t since. There was no question in my mind it was Dad. He was just stopping in to say “Hello,” letting me know he was still with me. Of course, eventually the visits from the red dragonfly became a thing of the past, and I didn’t think about them anymore. Fast forward to today. We had a courtyard gate installed last year, but elected to not have them attach a self closing spring. Well, that was a mistake of course if you have a pet. So, last week I finally purchased the spring mechanism but waited until today to install it. Dad taught me everything I needed to know about tools always supervising my projects. So, I’m not exactly a novice, but I know enough to be dangerous. He gave me my first drill, taught me how to use a crowbar, and I have been in love with construction ever since. Now, installing this self-closing mechanism is not rocket science, but I didn’t want to have any “extra” drill holes in my gate, so I took my time. Patience paid off and I got it right first time out; miracle in itself.  Now, I gathered up the few tools I used, and preceded to walk towards the front door. As I reached for the handle on the  screen door I heard a loud buzzing very close, a little too close, behind me. Thinking it was one of those damn huge carpenter bees that sound like a B-52 bomber, I quickened my pace and hurried to get through the door. As I pulled the screen door closed behind me I turned to look out only to see a fast moving, loud buzzing blur. Whatever it was, it was quick. Needless to say I was relieved I now had the screen between me and whatever this was. However, within seconds it came into focus and it wasn’t a bee at it all, it was a hummingbird! Here was this beautiful little bird zipping around in the vestibule not four feet from my screen door. Thinking this was extremely odd, that it would come this close to the house, much less a human, I stared out at this little guy who was now hovering in mid air. My mind was completely blank. Why was this little creature so close? So I did what you do when someone comes to visit…..I greeted it. “Hello,” I said out loud.  As soon as the words left my lips, it was gone.  The next thing I heard in my head were the words…..“Good job.”

Oh the tears! They rolled down my cheeks like hot little raindrops. I KNOW that was my Dad. There is no doubt in my mind. He wanted me know I had done a good job with the gate. Evidently he’s still supervising my projects. Think what you will, but I believe in signs.

Since Dad was a lover of golf, and would do so whenever he got the chance; I thought I would share what we decided to put on his marker.

Family is given the last line on the markers to add their sentiments. Although we saw a lot of things like, “You will be missed,”  “Beloved Husband and Father,” it was the marker below that I stumbled upon, quite accidentally [again coincidence???],  that let me know it was okay to inject some humor into what is a very sad part of life.

Not sure if he had a sense of humor, or if those were his last words.
Whatever the reason, God bless him.

About me text should be added here.